This demo shows how to create and manage really simple game state switcher. It works by changing a global variable state that points to any one of a number ofobject .. end state blocks.

Each state block is setup up with these functions:

By changing the global state variable it is easy to switch to any other state during runtime.

Here is a visual overview of the basics behind the program flow/state switching. In this first set up the 'state' is set to point to the titlepage object. During the main loop the titepages update() and draw() are called. 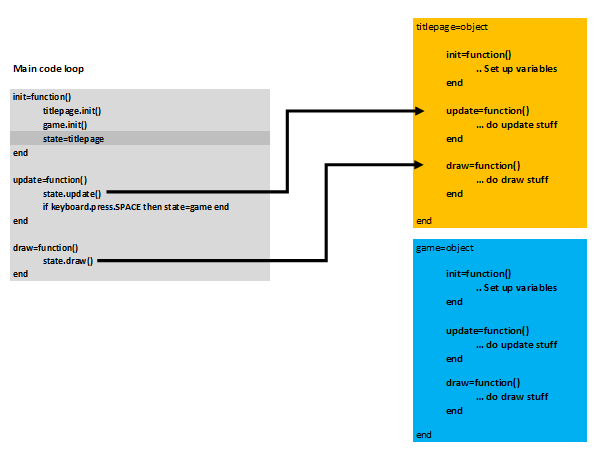 Now, according to the code here, when SPACEBAR is pressed the 'state' is set to point to the game object. From now on, during the main loop the games update() and draw() are now called. 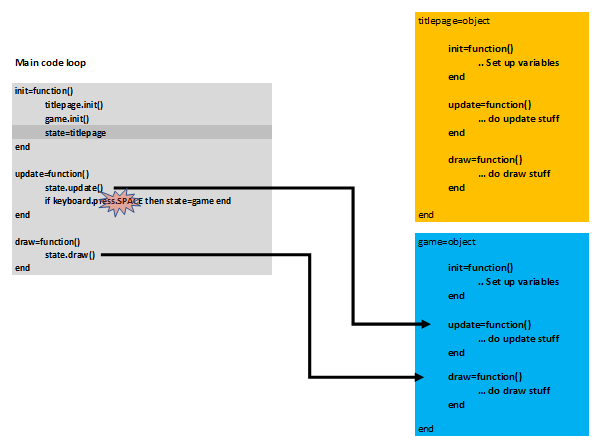 In this demo a state block is switched via:

newstate is the name of state block that you want to take control of. For example

When a state is switched via the above function its go() function is also called. This makes it easier to manage what you want to do whenever a state is revisited again. Such as reset sprites, variables, and so on ..

The main game is typically set up like this. Note how all states are initiallized at the start

Let's suppose the active state is the titlepage code block. In it's update() loop you can switch to another state like so:

Likewise from the maingame block you can switch around to any other code block:

The main game loop just constantly calls state.update() and state.draw() so, whatever block the state variable is pointing to gets updated and drawn during runtime.

It’s funny, because I was considering asking for examples of state machines in microScript. Granted, I might not yet be literate enough to understand this style completely. But please answer if you can; do you think some of the code for “Meowy’s Adventure“ could be considered a state machine?

Meowys Adventure is using what I consider the classic way of controlling the game state, via a 'mode' variable. Typically done in the top-level main loop.

My method a more of a direct 'state switcher', in that the main loop just jumps to whatever object .. end code block you choose. I prefer this 'fire and forget' method, as I don't need a big chunk of if mode==SOMESTATE then checking going on (which happens when more and more modes are added).

Yeah, I can see that for big switches from the menu to actual gameplay. From what I understand though, state machines can be used for situations that are much more local, like below:

This is the code I was originally referring to. Your thoughts?

My code is all about switching to one of these directly without having to care about much else. The main loop can be told 'Settings' is your new focus, and the others are just dormant.